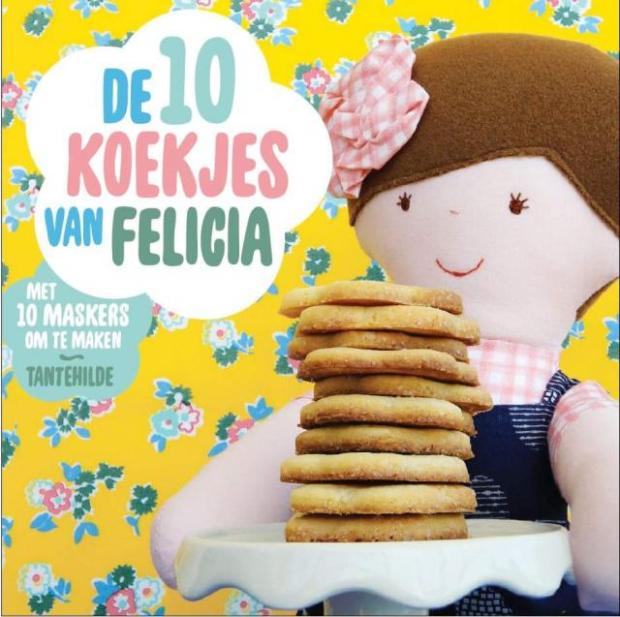 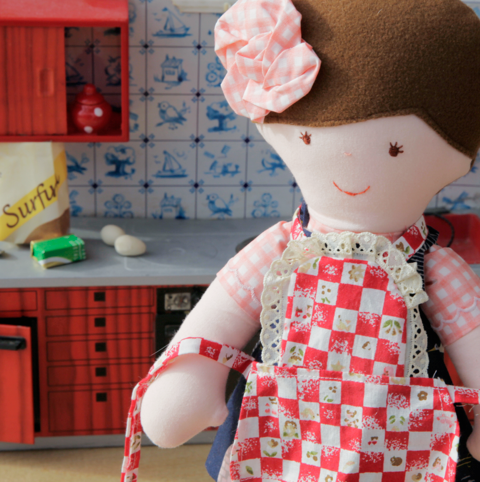 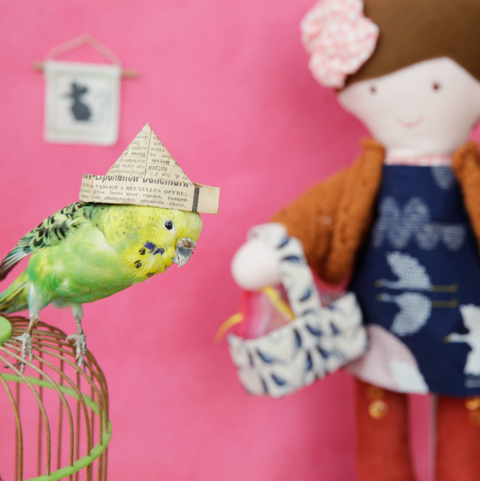 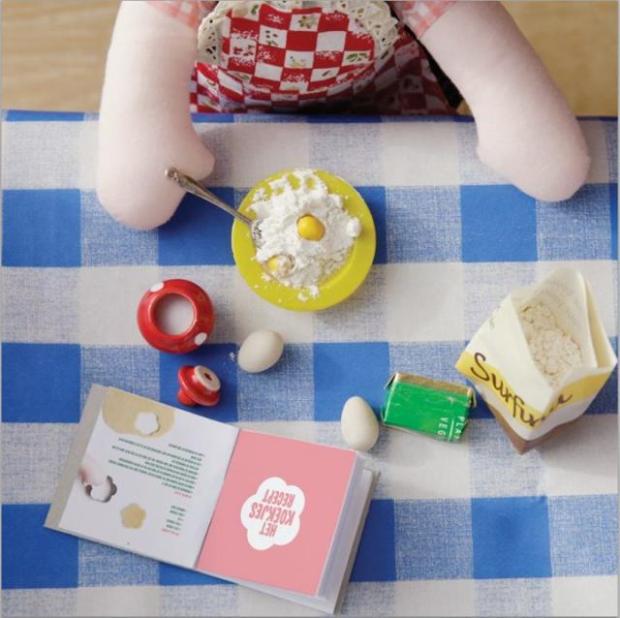 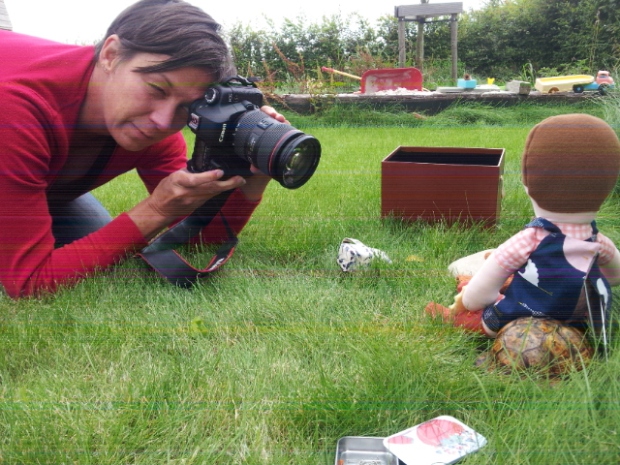 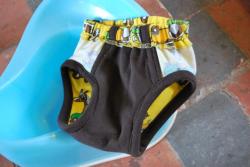 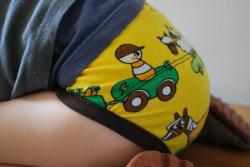 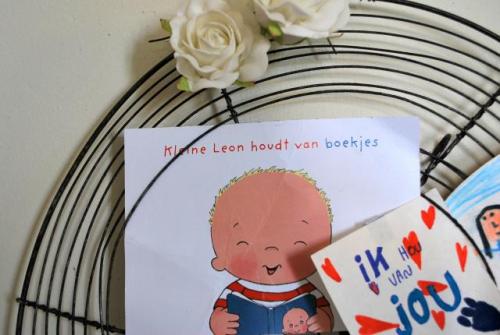 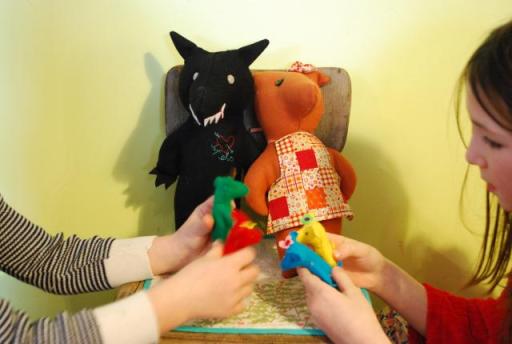 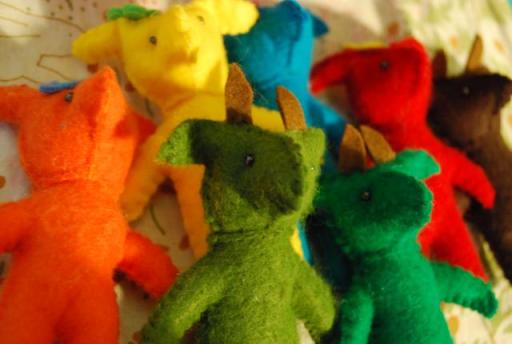 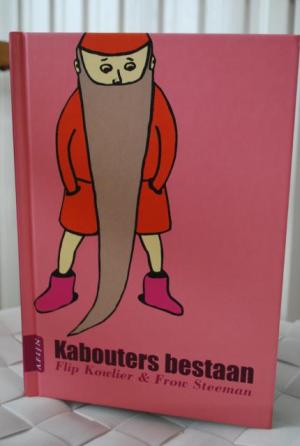 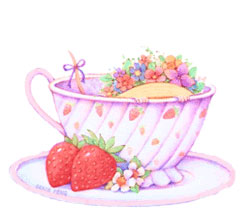 Oh that girl looks a bit sad and lonesome. Her friend Gilles had already gone and she had to stay alone at home.

But hey, who’s that? 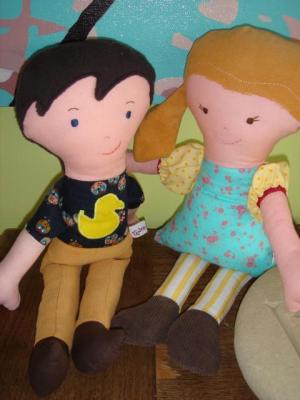 Oh a new friend, that’s a new doll with a duck on his t-shirt! 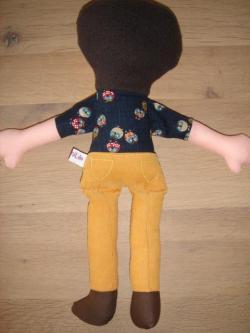 Custom order for a baby who’s birth announcement was with the theme of little yellow ducks. 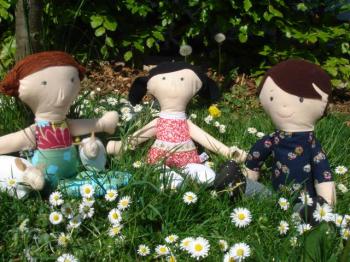 Hi there! You seem to be a sweet doll. Where are you from? 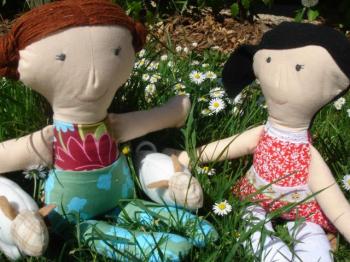 – I’m going to move to the Netherlands. There is a sweet Dutch girl who wants to play with me over there. And you?
– I’m moving to Norway. There is a nice lady there who wants to take care of me, and I can take my sheep along, because I’ve heard she raises sheep.

-And you? Aren’t you going somewhere?
-Oh yes, I do. I’m going to a very little babyboy! He is so small that I have to take care of him instead of the other way around. Therefore I am taking a little nap. 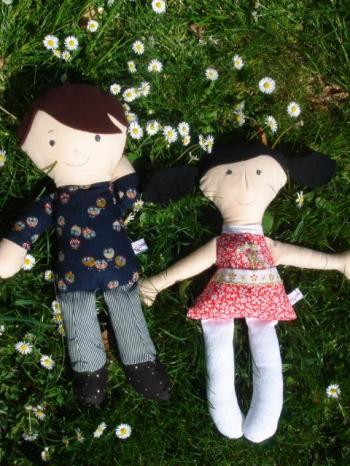 I have no time to take a nap, my sheep are running off. I must follow them! Bye bye! Have a nice trip!!!

There was once and old goat who had seven little kids. One day the old goat wished to go into the woods to get food for her children. She told them: “Dear children, do not open the door while I am away. If the old wolf should get into our hut, he would eat you all up, and not a hair would be left. You can easily tell him by his rough voice and his black feet.”
“Dear mother”, cried the young kids, “we will be very careful not to let the old wolf in. You need not think of us at all, for we shall be quite safe.” Then the old one bleated, and went on her way with her mind at ease.

Soon someone knocked at the door :”Open the door, my dear children, your mother is here, and has brought something for each one of you.”

“We will not open the door,” the kids cried out. “You are not our mother. She has a soft and gentle voice, but your voice is rough. You are the wolf.”

So the wolf went to a shop and bought a large piece of chalk, which he ate, making his voice soft. Then he came back and knocked at the door, calling out, “Open the door, my dear children. Your mother is here and has brought something for each one of you.”

But the children saw his black foot at the window and cried out, “We will not open the door. Our mother does not have a black foot like you. You are the wolf.”
Then the wolf went to the miller’s, and said “Put some flour on my foot, for I have hurt it.” The miller was so afraid of the wolf that he did as he was told.

Now the wicked wolf went to the goat’s house again and said: “Open the door, dear children, for I am your mother.”

“Show us your foot”, said the little kids.
So the wolf put his one white foot on the window sill, and when they saw that it was white, they believed that everything he said was true, and they opened the door. But who came in? It was the wolf.

They were terrified and wanted to hide. One jumped under the table, the second into the bed, the third into the stove, the fourth into the kitchen, the fifth into the cupboard, the sixth under the washbasin, and the seventh, who was the smallest of all, in the tall clock. But the wolf found them all, and he swallowed them down his throat, one after the other. However, he did not find the youngest kid, the one who was in the clock case.

Then the wolf, who felt sleepy, went out and lay down on the green grass. Soon he was fast asleep.

Soon afterward the old goat came home from the woods. Oh, what a sight she saw there. The door stood wide open. Table, chairs, and benches were tipped over. The washbasin was in pieces. “Where are my dear children?’ cried the poor goat. At last she heard a little voice crying, “Dear mother, here I am in the tall clock.” The old goat helped the little goat out. Soon she learned how the wolf had eaten her children.
In her despair she went outside with her youngest kid. They came to the meadow, and there lay the wolf by the tree, snoring so loudly that the branches shook. She looked at him from all sides and saw that something was moving and jiggling inside his full belly.

“Ah,” she said. “Is it possible that my poor children, whom he has swallowed down for his supper, can still be alive?”

With a pair of scissors she cut open the monster. And one after the other all six jumped out, and they were all still alive. They were not even hurt, for in his greed the monster had swallowed them down whole. How happy they were! They went hopping and skipping around their mother.
Than they put big stones inside the wolf. The old goat sewed up the wolf’s side so gently and quietly that he did not wake up nor move.

When at last the wicked wolf did wake up, the great stones inside him made him feel very heavy and thirsty, so he went to the draw-well to drink.

The stones were so heavy that they tipped him over the edge of the draw-well into the deep water, and he was drowned.
When the seven kids saw what had happened, they ran up and cried out, “The wolf is dead! The wolf is dead!” And with their mother they danced for joy around!

Click here for the free pattern of a little goat!
You would make me very happy if you leave a comment with a link to the photo of your little goat!